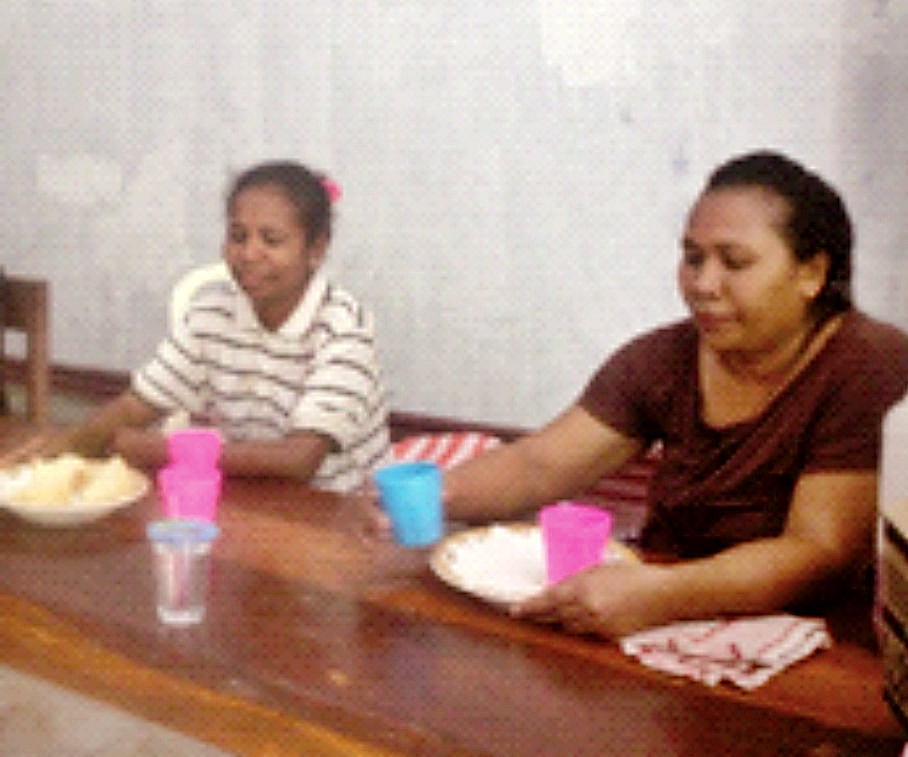 Aprilia Sara Fahik, who is usually called Lia (42 years old), a mother in Fafoeklaran Hamlet, Besikama Village, West Malaka District, Malaka District, NTT. Her daily activities are housewives, Lia is grateful to carry out her duties ranging from taking care of the house, taking care of the children, her husband and all family members who live together at home. For Lia, family is a pride that always provides motivation to stay motivated. Aside from her routine as a housewife, Lia is also a member of the Besikama Village Health Team (TKD). During partnering with the Bethesda YAKKUM UPKM / CD in the Malacca area, Lia and other TKD members have carried out many activities to improve public health, such as providing health outreach, screening for people suspected of having tuberculosis, distributing pots and assisting sputum examinations and even delivering x-rays to homes sick for those suspected of having tuberculosis.

Not only that, promotive and preventive programs are also carried out such as PMT for Toddler malnutrition in every Posyandu with support from UPKM / CD YAKKUM Bethesda Malacca area and collaboration with Puskesmas and local Village Government. As a member of the Village Health Team and together with the community, Lia was also trained in making wound oil, massage oil, telon oil and making solid soap.

In October 2019, Lia and other cadres received training from the UPKM / CD Bethesda YAKKUM Malacca area. In this practical, familiar and fun training, Lia was trained in making Marungga Biscuits (Birungga) and Marungga Bruas Cakes (Burasma) made with ingredients from Marungga leaves or also known as Moringa leaves. The people of Besikama Village have only been processing Marungga leaves to make vegetables. With a myriad of benefits possessed by the Marungga leaf, Lia wants to improve nutrition for Toddlers in particular and also the community at large.

After the training, Lia and other TKD members formed a group that produced Birungga and Burasma Besikama. Group members manage funds from self-help, initiative from all group members to donate funds of Rp. 50,000 per person to buy the required ingredients such as: flour, refined sugar, eggs, milk, vanilla, tapioca flour, cornstarch, bananas, and cooking oil. As for marungga, they are directly picked from the yard of each group member. The manufacturing process is fairly easy, which is a mixture of 10 kg flour, 5 liter cooking oil, 4 eggs that have been shaken, 4 packs of refined sugar, vanilla to taste, then stirred into a mixture and after the ingredients are mixed with flour and marungga stir back. After that the dough is ready to be printed and baked for 15 minutes or until cooked.

In order to improve the economy, the making of Birungga and Burasma is not only done in every PMT distribution schedule in the Posyandu, but it is done every day. Then it is packaged beautifully so that it attracts buyers, with a market price of Rp. 60,000 / kg. Groups of Birungga and Burasma makers sell to every stall in the Besikama area, even out of the village. Lia felt grateful because the processed products were not only consumed by the people around the West Malacca region, but had already left other sub-districts. Even the processed Marungga into Birungga and Burasma have also been sold outside the region at the request of the Atambua Attorney Belu Prosecutor as much as 20 kg with a value of Rp 1,200,000.

Hopefully with this collaboration makes the group's business smoothly and increasingly known to the wider community. Lia dreamed that her group would continue to grow, both in managing the organization and in its business activities making Birungga and Burasma professionally and having a production permit or P-IRT. Through Birungga and Burasma, Lia wants to contribute to public health. For Lia, thanks to the partnership and cooperation between UPKM / CD Bethesda YAKKUM, Puskesmas and Village Government, efforts to improve public health in Besikama Village are more synergistic and easier to realize. * (Pascalius / Marmi).